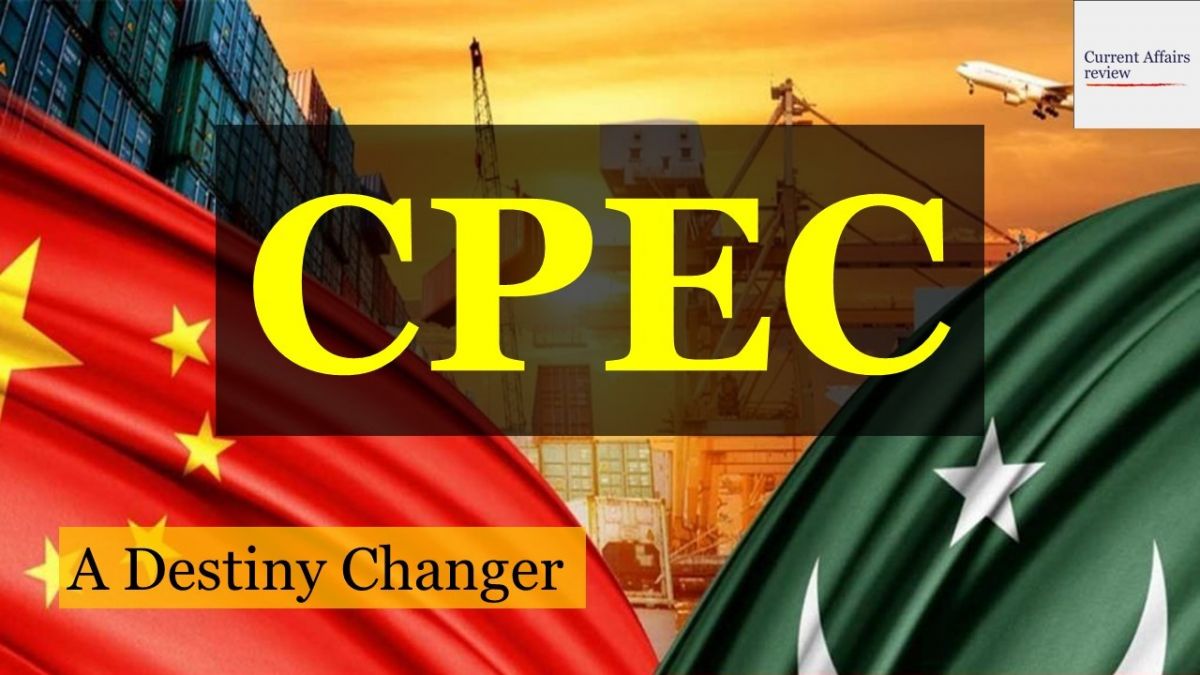 The China-Pakistan Economic Corridor [CPEC] constitutes one of the largest foreign investment China has made in the framework of the “One Belt One Road” [OBOR] initiative. In 2013, CPEC was envisaged by President Xi Jinping to establish close and maritime links among sixty plus countries between Asia and Europe. It was intended to link ancient Chinese trading town Khasgar in China’s Xinjiang province to Gwadar sea port in Balochistan on the edge of the Persian Gulf. The corridor traverses Jammu and Kashmir, the status of which has been subject to contention between India and Pakistan since 1947. However the idea of connecting China to the strategically important waters of Arabian Sea had first evolved during the construction of Karakoram highway during the 1960s and 1970s. The highway was then used for transporting weapons and missiles to Pakistan.

The vision behind CPEC is rapid expansion and upgradation of Pakistan’s infrastructure and strengthening the economic ties between China and Pakistan. It includes building roads, laying railway lines and pipe lines to carry oil gas. The project is financed by heavily subsidized loan that was disbursed to the government of Pakistan by Chinese banking giants such as Exim Bank of China, China Development Bank, and the Industrial and Commercial Bank of China. Share of Pakistan and China for these projects will be 10% and 90% respectively.

CPEC has been called as “game changer and fate changer” by the Pakistani press and government as both China and Pakistan intend that this massive investment plan will transform Pakistan into a regional economic hub and further boost the ties between the two countries. It will also provide a greater strategic leverage on both India and The United States in the Indian  Ocean.

The multi-billion dollar project is expected to give a sharp boost to the country’s GDP growth rate during the period 2015-2030. The $46 billion investment by China is three times the total FDI it has got in the last decade. The bulk of the investment will be in energy as energy crunch has clogged the economic development of the country intensifying unemployment and poverty in the last decade. $15.5 billion will be used in coal, wind solar and hydro energy projects to generate electricity equal to 16000 MW by 2021, and curtail the shortage by 4000-7000 MW.

CPEC will also be the pioneer in revamping the decrepit and abysmal infrastructure of the country. It will modernise the transportation network by constructing road and rail networks worth $11billion. Optical fibre cable network between China and Pakistan will also be built at an estimated cost of $44 million. The corridor is expected to create around 7lakh employment opportunities between 2015 and 2030 and add about 2-2.5% to Pakistan’s GDP.

CPEC will play a critical role in China’s foreign policy by binding infrastructure measures aimed at establishing a “New Silk Road” running through Central & South Asia with efforts to create a “Maritime Silk Road” in the Indian Ocean. The 13000km voyage from Tianjin to the Persian Gulf through Strait of Malacca would be reduced to 2000km road journey from Kashgar to Gwadar. This trade route will be beneficial for China’s oil imports as well as land access to Indian Ocean. Moreover, it will open up a brand new strategic gateway into African, West Asian and South Asian trade.

CPEC will also help China to develop Kashgar as a trade terminus which will reduce the isolation of the restive Xinjiang province, deepen its engagement with rest of China, and raise its potential for tourism & investment.

Apart from these, Chinese companies will get massive investment opportunities as well as license to operate the projects as profit-making entities as per the terms of agreement.

In spite of the fact that CPEC is a “fate changer” for Pakistani economy, Chinese apprehensions about conditions on the ground in various provinces of Pakistan keep growing. There are several reasons for this. The CPEC stretches across Xinjiang, Gilgit Baltistan and Balochistan. These three regions face territorial contestations and rejection of state apparatus by the local populace who claim a legitimate right over local resources. The political discontent in Xinjiang stems from ethnic issues and has been triggered by relentless subjugation of the majority Uighur population in the province. They have refused to accede to the Chinese control and proclaim that it does not belong to the People’s Republic of China. Gilgit Baltistan is a part of POK. The region is claimed by India and populace there solicits independence from Pakistan. Pakistan has been advised by China to explore all the possibility of absorbing the region as a province so that the “disputed” tag is removed and CPEC can go
ahead without diplomatic complications vis-a-vis India. Balochistan remain a dilemma for Chinese with no end in sight. It has been embroiled in a perpetual state of turmoil and political tussle with the Pakistani state. People there have complained that power projects that ought to be theirs have gone to Punjab. The unpredictable
security situation remains a huge concern for the corridor. There have been instances of killing and kidnapping of Chinese nationals. Pakistan has deployed 15000 special security forces for Chinese nationals and companies along the corridor to counter any terrorist attack on CPEC projects. While the military brass and the civilian government had both agreed to CPEC, nobody is clear on the terms of agreement. Lack of transparency and accountability is also a major issue for CPEC. Economists in Pakistan are of view that CPEC may be a debt trap. They mention the indebtedness of Sri Lanka in this regard.

India had opposed CPEC ever since it was initiated. India registered its protest by boycotting high profile Belt and Road Forum organised by China. The Ministry of External affairs said that CPEC violated India’s sovereignty and territorial integrity and no country could accept a project that ignores such core concerns. Its principal objections were:-

Apart from these there are a few more headaches for India. They are:-

In response to the objections raised by India, China said that no other country in the project has objection against lack of transparency. It gave India a four-point initiative to improve ties between them. It further said that if sovereignty was the only issue then it would work around it as it had done during China-Pakistan
border dispute of 1963, in which they agreed that all negotiations were subject to renegotiation after the “settlement of Kashmir dispute”. However, India remained unconvinced. Chinese have been keen to join hands with India as they are aware that the corridor passes through territory that is disputed between India and Pakistan.
However, for this China have to make several concessions to India which include inter alia, greater transparency, lateral connectivity Eastward and Westward for which India would be an equal partner and Indian industries will be given free movement in the project areas.

CPEC is a part of Chinese plan to secure and maximise its supply lines through Gwadar with an enhanced presence in the Indian Ocean. Hence, it is extensively considered that upon CPEC’s materialization, a comprehensive Chinese presence will undermine India’s influence in the Indian Ocean. There is possibility of a robust naval presence at key points that may put China in a commanding position at “the mouth of the gulf” in India’s perceived “home ground”. Article VI of China-Pakistan border agreement 1963 states that after settlement of POK issue, the sovereign nation would start negotiation with People’s Republic of China – so it is implausible that India’s sovereignty will get affected. Hence, CPEC might become fruitful as it is not only a bilateral cooperation but also multilateral project in the long run. It would enable India to foster its exports and axe its trade deficit with China. Moreover, by keeping territorial issues aside, the corridor will help India to access Central Asia through roadway, which will be much more economical compared to the sea route across Chabahar.
There are a few unanswered concerns for Pakistan as well. Will the Chinese variety replace the US and Saudi imperialism? What will happen if China deviate its interest to different territory and projects, and CPEC is abandoned like some African mining site? Will CPEC really be the destiny changer for Pakistan at the further loss of its sovereignty, given the absence of any indigenous economic strategy other than one corridor? There is bound to be an ancient Chinese proverb warning about putting all eggs in one basket.

India’s position will definitely have a substantial repercussion on China-India relations. India had made it clear that unless China was willing to discuss alternate routing, it will neither join the project nor attend the forum with B&RI map showing Gilgit Baltistan in Pakistan as a part of “CPEC”. However, in a statement by India’s high commissioner to Pakistan, it was noted, “India has no worry over the construction of Pakistan-China Economic Corridor as economically strong Pakistan would bring stability in the region”.
CPEC is ultimately a thorn in Delhi-Islamabad relation. While India’s overall perspective on POK remains understated, the commencement of the CPEC warrants more profound attention than what has been accorded so far. There is a need to scrutinize the circumstances meticulously and fabricate a suitable and sustainable stratagem that could aid India’s long-term interests.

License: You have permission to republish this article in any format, even commercially, but you must keep all links intact. Attribution required.
Tags: China-Pakistan Economic Corridor CPECOne Belt One RoadOBORHope For Pakistan China’s InterestThe Vicious Circle